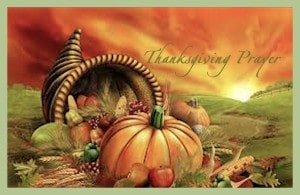 It was the Monday before Thanksgiving. I had made the choice to move from Portland to San Francisco right after Labor Day, to start a new chapter of my life. It didn’t take long to become acquainted with people at work, at my new church, and through the local Glen Park Homeowners’ Association.

Two weeks before, I had started thinking about how I was going to spend Thanksgiving, and had been asking everyone if they had plans, hoping that someone would either invite me to share the day with them, or leave the door open for me to suggest a group potluck. Everyone had plans. I felt awkward about inviting myself, so I’d usually reply, “That’s wonderful,” or something similar. By Monday, I was feeling very alone, and sad.

Contrary to my religious background, I had always believed that prayer can be anything. Praying wasn’t limited to church. It didn’t have to follow a particular format. It could be one or two words, “Please,” or “Thank You”. The fear of being alone, the pain of feeling unwanted was unbearable. Tears were flowing down my cheeks like a waterfall in the spring. Can’t remember now whether I said my prayer in silent agony, or whether I cried out, “I don’t want to be alone on Thanksgiving. I want to be . . .”

The phone rang before I could finish the thought. I wiped my face with the back of my sleeve, sniffed back the mucous in my sinuses, and cleared my throat. Didn’t want anyone, especially a business associate, to know that I’d been crying.

“Hello,” I said, trying to keep my voice steady.

“Diane, this is Judy. The Glen Park Homeowners’ Association.”

“That’s what I’m calling about.” Her voice sounded different. Not the bubbly, outgoing Judy that I’d come to know the past three months.

“Are you okay?” I asked, hoping that she didn’t have bad news. Judy had announced at the last HOA meeting that she was pregnant, and might need some help with the responsibilities of the Association secretary.

“Well, I could be better. The doctor has said that I’ve got to spend the next six months in bed until the baby arrives. I don’t want to have another miscarriage.”

“Oh, I didn’t know about the miscarriage. I’m so sorry. What can I do to help you?”

“Can you take the minutes at the meetings, and possibly help me with the newsletter?”

“Of course!” Then an idea came to me. “How are you going to fix Thanksgiving dinner for your family?”

“Oh, Tom and I have talked about it, and we’ve told Jimmy that Tom’s going to buy frozen TV dinners and a pumpkin pie at Safeway.”

“Are you disappointed about not being able to cook? Some people have never fixed a Thanksgiving meal.”

“Yeah, I’m disappointed, but it’ll be better next year after the baby comes.”

“I’ve got an idea, Judy. I don’t have any plans for Thanksgiving. How about I fix dinner for you and Tom and Jimmy?”

“That will be wonderful! Thank you so much!”

The next several minutes were spent figuring out the logistics. Because I didn’t have a car, and the local Safeway was at the top of Diamond Heights, it would be impossible for me to shop for all the groceries. So Judy and I created a menu and a shopping list. Tom would buy all the ingredients and deliver them to my apartment that evening after work. Then he’d pick me up on Thursday around 11:00, so I’d have time to finish everything at their home. We planned to eat around noon.

My feeling of lonely despair changed in a couple of minutes to complete excitement and enthusiasm. This was going to be the best Thanksgiving feast I’d ever prepared!

Tom arrived with all of the groceries around 7:15 pm on Monday, as Judy had promised. He had thought ahead and planned for Thursday. Instead of paper bags, all of the groceries were delivered in boxes, so it would be easier to transport the food to their home. It was hard to fit all of the perishables into my small refrigerator, and both of the countertops were overflowing with ingredients to make the “from scratch” pie and stuffing. What a joyous sight it was, to see this wonderful cornucopia! While putting everything away, my mind flashed back to my very first apartment on Division Street in Portland, how I lived on soda crackers and ketchup at the end of the month until the next payday.

My apartment kitchen was so small, I had to do everything in stages. Chopping and sauteeing the onions and celery was a challenge because my small frypan wouldn’t hold more than a few cups at a time. The only way that the bread and vegetables could be combined was to use one of the aluminum roasting pans I’d asked Tom to purchase. My largest, and only, mixing bowl was only one quart, and it had been assigned to the homemade cranberry sauce. The cranberry sauce had to be finished before I started cooking the giblets for the gravy because I had brought a one-quart saucepan to San Francisco. One small set of dishes, four glasses, and minimal cooking utensils filled every inch of storage space in the cabinets.

The same saucepan got a lot more use in two days in my tiny kitchen than it had since my last Thanksgiving in Portland. The kitchen in Portland was at least three times the size, and I didn’t have to worry about cookware or utensils getting dirty. I’d just grab another utensil, and throw the dirty one in the dishwasher. Now, in my little apartment, I had to hand wash and dry everything so it could be available immediately. How life can change so quickly. How little thought we give to things we own and use.

It was a fun-filled two days. I didn’t see it as a test but as an adventure. My first adventure!

When Tom arrived to help me load the food, he was surprised that everything was ready to go. I had lined all of the boxes with every towel I owned and carefully nestled the containers in the boxes to avoid spills. No, turkey gravy wouldn’t taste good on pumpkin pie. Fortunately, the turkey fit in the largest box. I had forgotten that Judy and Tom lived in a typical narrow San Francisco row house, with the garage and entry on the street, and the main living area a full flight of steep stairs up from the entry. It took several trips, but everything traveled without spilling.

The first thing to tackle was finishing the turkey that I’d started cooking around 7:00 that morning. Planning ahead paid off. If I’d just brought the raw bird, we probably wouldn’t have dinner until midnight, because Judy and Tom had never gotten around to getting their oven door fixed. One hinge was broken, so the door hung lop-sided and we had to rig a temporary fix so most of the heat would stay in the oven. Fortunately, the turkey was ready around 2:30, so we could eat dinner. Their son, Jimmy, like most kids, was impatient to eat with everything smelling so good. I was concerned that Tom was giving him too many snacks. Little 6-year-old boys are amazing! He ate like he’d been starving since the day before!

We plated the food in the kitchen and brought it into the master bedroom, where Judy was propped up on several pillows. I couldn’t imagine how trying it would be for her to be stuck in the bedroom, flat on her back, for the next six months, but it was a choice between resting or dealing with the heartache of another miscarriage. She used the only cookie sheet they had as a lap tray. Jimmy sat next to her, so she could help him. Tom and I sat on the floor and used kitchen towels as placemats under our plates at the foot of the bed. Tom said the most beautiful grace. I can’t remember the exact words, but the emotion of his gratitude for all our blessings was truly moving. This was the first time it dawned on me, that I wasn’t alone on Thanksgiving. I had said a hasty, needy prayer, thinking only of my current conditions on Monday. Three days later, I was totally enjoying a Thanksgiving meal with a family that needed me.

That Thanksgiving was a life-changing event for me. I learned that prayers are answered, often in ways that we could never imagine. I also learned that when we’re ready and willing to serve others who need our help, we can leave behind our own needs. And we can grow out of the pain, to enjoy new adventures ahead.

Warmest wishes for a wonderful Thanksgiving, filled with an abundance of happiness and love.