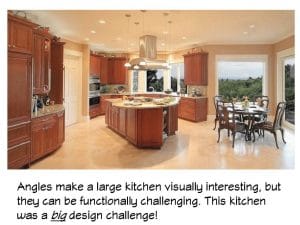 The remodeled angular kitchen functions and looks great, but the original kitchen looked and felt like an after-thought. The function was impaired by multiple 45- and 90-degree angles. Homeowners wanted their remodeled angular kitchen to work for them daily, and provide a functional area for multiple chefs and servers when they entertained. Their kitchen wish list included the following features:

Several contractors and design professionals recommended an addition, combined with reducing the number of angles, but the estimates were outside the Homeowners’ target budget. Would it be possible to give them a remodeled angular kitchen and improve the function? Yes, but it was a challenge. And there were some tradeoffs, to achieve the desired results. 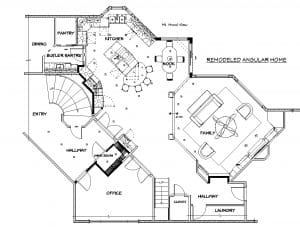 Because the kitchen would be used by several people simultaneously, it was important to maintain maximum aisleways between countertops. Appliance door swings were a very important consideration, to avoid traffic jams or accidents. An open dishwasher door can be particularly hazardous if there’s food preparation, serving, and clean-up occuring at the same time. A server carrying a tray of hors d’oeuvres can’t see a potential trip-fall risk.

Next, a baking preparation corner with double convection ovens was created adjacent to the “working” end of the island, to the left of the main sink. There was storage for everything related to baking, and the existing walk-in pantry was only a few steps away. The problem was: What to do about the requested third oven, and the microwave oven? Between the refrigerator and freezer, on a long angled wall, there was an adjacent guest closet that the Homeowners admitted was too deep. Space was borrowed from the closet, so a microwave-convection oven could be installed. All the pieces of the puzzle were fitting together nicely!

The only thing left on the Homeowners’ appliance wish list was an under-counter wine refrigerator. The logical place for it in the remodeled angular kitchen was in an area where the existing desk was located. They decided to abandon the desk, and the area became a self-serve wine bar for family and friends!

Because the kitchen was very large, over 350 square feet, it was easy to create guest seating at an elevated countertop at the end of the island. Guests could sit at the island, or they could sit in the adjacent eating nook. In nice weather, the patio was accessible to guests through the new sliding door in the eating nook.

The balance of the actual design time was spent defining the cabinets and storage details, selecting the remodeled kitchen lighting and finishes. It took about four months for the Homeowners to select everything that was included in the final plans. See the before and after photos, and read more about this project.