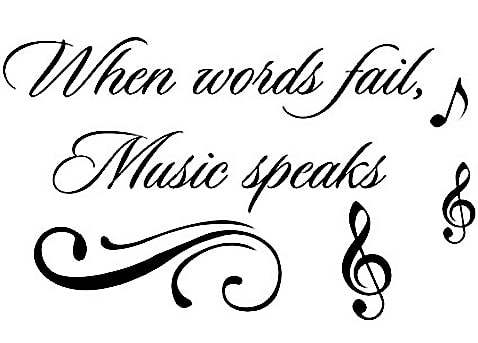 Music is a profound and powerful influence in our lives. From birth until death, music is there at every stage to comfort, inspire, motivate us in the most personal expression of who we are.  Music has been the most important part of my life. I started taking piano lessons when I was 8. My first teacher was my godmother, Mama Chinn. She taught me the basics of technique and timing. Her greatest gift, though, was a love of music that has endured. That’s what music is all about. It touches us in ways that nothing else can. It’s a universal language that everyone understands. It’s the loom upon which our individual fibers are woven into the miraculous, colorful tapestry that blankets our precious earth.

I asked my husband, Jay, to join me on this week’s podcast, because he’s the most knowledgeable person I know about this subject. Not just music, but how we listen to music. Music is what brought us together! I met Jay after I moved to San Francisco and had problems with my stereo picking up truck drivers’ CB discussions. He was the only one who was able and willing to help me. The rest, as broadcaster Paul Harvey said, is a wonderful story.

Last week, Jay and I were fortunate to tune into a rebroadcast CBS program produced by James Corden that featured Paul McCartney. If you’re a Beatles fan, I know you’ll love it. Everywhere they went – okay, they were in Liverpool! – crowds of people gathered around. Paul was so gracious with everyone. Don’t know how word got out when they visited Paul’s childhood home, but the streets were lined with cheering fans of all ages. Yes! And in the local pub where Paul and his band played shortened versions of many Beatles’ hits, the audience included old and young, and every generation in between. Wouldn’t be surprised to learn that the room had four generations of Beatles’ followers. This is a tiny example of music’s influence.

It’s obvious that Paul McCartney loves music. When he talks about it, when he plays it, his inner light shines. Did you know that he’s composed classical music? His first was the “Liverpool Oratorio,” in 1991, followed by “Standing Stone,” recorded in 2001, and “Behold My Heart” that was recorded in 2007. He has a new composition, commissioned by the New York City Ballet, “Oceans Kingdom.” All of his music has been at the top of different charts.

We are lucky to be surrounded by thousands of composers of all genres. We fall in love with music for the way it touches our soul, whether it’s country, rock, blues, jazz, spiritual, cultural, or classical, or a mashup of them. Many composers and performers cross over from one genre to another, like Paul McCartney has over the past 59 years. As the oldest daughter in an alcoholic family, I could tell Beethoven, Bach, Chopin, Debussy and Rachmaninoff about everything that burdened me. After hours of conversation with them at my old upright piano, I stepped away feeling and knowing that everything would be all right. Have you had similar experiences in your life, where music has helped you get through tough times?

Jay and I met because of a shared love of music. When we started dating, he introduced me to Mannheim Steamroller. I’ll never forget our drive through the Sequoias National Park in his convertible, listening to “Fresh Aire,” on a hot day in July. The air was heavy with the aroma of the evergreen trees. We have been avid fans of Mannheim Steamroller to this day. When I decided to launch “Today’s Home,” my internet radio program, they allowed me to use “Wolfgang Amadeus Penguin” as the theme song. Every time I hear it, I’m filled with child-like glee, wanting to get up and march around the room.

Music inspires us, motivates us, connects us in ways that nothing else can. I love this quote from Leopold Stokowski, “A painter paints pictures on canvas. But musicians paint their pictures on silence.” Music is a very personal form of creative self-expression, whether we’re listening to it or playing an instrument. Whether we’re in a large auditorium with 30,000 other people, or riding alone in our car on the way to work. Whether we’re “rockin’ out” to the oldies while we clean our home, or centering ourselves with soft meditation music in the middle of the night.

Several years ago, after I learned about Louise Hay’s positive affirmations, I decided to record them to overcome the anxiety that’s plagued me most of my life. The recordings were okay, but became a listening staple after I added soft background music. Last year, when we had a special dinner, we played the same music. I have made a list of this music for you as a personal gift. All of our guests commented about how the music created an unforgettable ambiance. I’m fortunate that Jay knew how to create this ambiance in our home. One of his first jobs after college was making Infinity speakers, before he went to work at Sound Systems in San Francisco. We have speakers in every room (and outside) that can play from anywhere through a small computer, an “Orange Pi.”

Jay is a member of a worldwide group called D-I-Y Audio. He learned about the “Raspberry Pi” from another member who used this small computer – the size of a deck of cards – to access his massive collection of music. We also have a massive collection of cd’s and vinyl records. It’s fantastic to have everything so easily accessible! Jay tells all about it in our podcast discussion; to listen to the podcast, just click on the link below!

When I’m in the mood for loud music like Blue Man Group, Japanese Taiko drum recordings, or the sound track from “Blast,” all I have to do is turn up the volume and sit in the living room. Jay figured out how to turn four non-structural columns into sub-woofer enclosures, with 10-inch Dayton Audio speakers. Right now, we’re using KEF 101’s as the satellites until Jay finishes building new speakers. Can’t wait to hear it! Jay has provided links to sites where he’s purchased audio parts:

Technology has made it possible for more of us to enjoy music anywhere without investing a fortune – unless we want to. Not going to bore you with statistics. You know how you love to listen to music, and you know what to listen to, to help you get through the daily challenges that life presents. The absolutely glorious thing about music in our world today is its universality, its ability to touch the spirits of everyone around the world instantaneously, simultaneously. Music doesn’t care what our cultural heritage is, or what political party we belong to. While we’re listening, we’re connected to everyone else who is, has been, or will be listening to the same music.

Music is the greatest gift we have!

I care about helping you achieve your home improvement dream! Contact me today to talk about your goals.