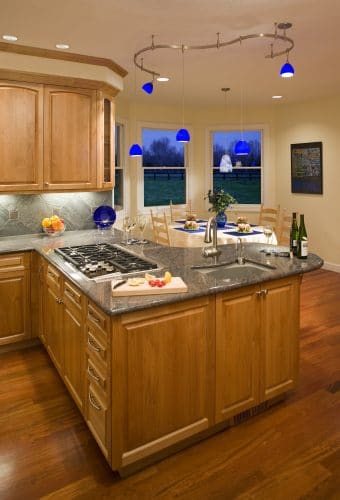 Do you see a “boot” in the peninsula countertop? That’s what we called the peninsula — the boot — after one of the daughters gave it that name during our design discussions. I’m going to start at the beginning, so you don’t get confused.

Every great kitchen project begins with a “Why?”

Sitting in the kitchen’s adjacent eating area the first week of December, Tom and Elaine told me why they wanted to remodel their kitchen. “It doesn’t work for us.” They are a family of five, with three adult daughters. Two of them were in college, and the youngest would be graduating in six months. The family loved to cook together, but two people couldn’t be working at the same time. They had figured a way to separate the cooking chores and work in shifts. Tom said, “We want the kitchen finished so we can have a big party on July 4th.”

♦ Why do you want to remodel your kitchen?

There are always problems and challenges!

What were the problems? Do you have similar challenges?

The kitchen malfunctioned, and it looked dated, although the house was only 12 years old. Oak cabinets had a finish that had yellowed. Soffits and walls were covered with blue-and-white stripe wallpaper. The off-white vinyl floor had a small tile pattern.

♦ Do you have problems that affect how you use and enjoy your kitchen? What do you want to change?

They knew the look they wanted, but it was the layout that had them stuck. I prepared five alternate designs for the family to discuss. Two design features required lengthy discussions because the alternatives were outside their comfort zone:

Every problem has multiple solutions; finding the right solution can be challenging!

Here’s how we solved all of the problems and created a functional and safe kitchen the entire family could use. 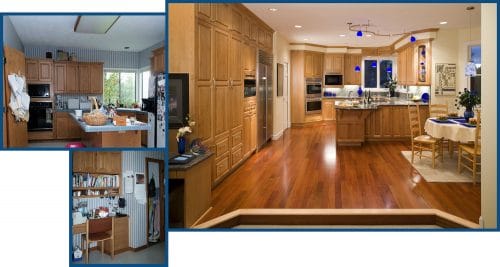 ♦ Do you get confused about all of your options? Would having options — with reasons — help you?

The family soon discovered how much fun it was to cook meals and get ready for parties together at the same time. It was exactly what they wanted. They fell in love with the new look, too.

It was wonderful to work through all of the possible solutions with the family. Everyone had an opinion, and it was delightful to see how they interacted to make the best decisions for maximum function and appearance. Fantastic communication made a big difference. The family provided honest feedback and wonderful suggestions. We all had a great time, especially after one of the daughters looked at a proposed plan and named the peninsula “the boot.” They all loved working together in the new kitchen, preparing family meals and getting ready to entertain friends.

If you are stuck trying to figure out your kitchen’s layout and details, whether you need it to function for multiple cooks or not, I’d love to help you!  I offer compassionate creativity that inspires communication. Contact me so we can talk about your specific needs!

Diane Plesset, CMKBD, C.A.P.S., NCIDQ is a Homeowner Advocate who specializes in helping homeowners with remodeling and addition projects. She has been the principal of D. P. Design since April 1984. Diane is the author of the award-winning book “THE Survival Guide: Home Remodeling” and many design awards.