A Monochromatic Color Scheme Can Be Many Things — Except Boring! 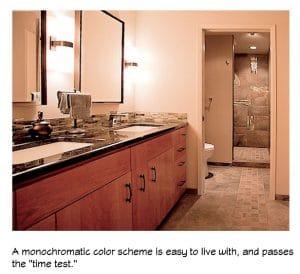 Have you ever wondered how paint manufacturers come up with the color names? It’s amazing! Most of the major manufacturers have in excess of 2,000 color options. There are very few colors that have the same names from one company to another. It’s nothing more than a marketing ploy. The names are supposed to make us feel positive about the color, and the manufacturer. No one in their right mind would select a color if its name was “Baby Poop”! Here’s a very short explanation about how professionals describe colors: 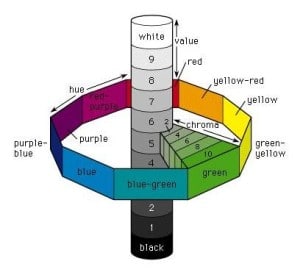 The Munsell Color System has been used for over 100 years to describe colors in a universally-acceptable way.

First, there’s the color name, the hue, taken from the color wheel that’s been used for centuries since Sir Isaac Newton first developed it in 1666.. Next is the brightness of the color, that’s called the value, followed by tints and shades which are the lightest and darkest of any color. Last is saturation (aka “chroma”), which determines how strong a particular color is. I was introduced to the Munsell Color System by an art teacher, and have used it ever since. It was developed by Albert H. Munsell and adopted in the early 20th century because it describes color in a universally-acceptable way, without the psycho-babble used by paint companies.  At the left is a chart that shows how it works.

The bathroom project featured in today’s tip  is as close to monochromatic  as possible, including the natural cherry cabinets. The color on the Munsell Chart is 5.5 Yellow-Red. The value is between a 3 and a 4, and there’s a full range of values. The countertop is the darkest and shiniest. The cabinet pulls, sconce trim, mirror frames and accessories are bronze, a darker shade of the hue. The cabinets are about midway in color. Natural cherry has a higher saturation and the wood grain can vary a lot. Below is an example of the color.

Years ago, a client wanted her bathroom walls to be painted to look like “pongee” (a type of silk fabric). Of course, without a sample to match, it would be impossible to achieve what she wanted. One of the paint manufacturers did have a color called “pongee,” but she didn’t like it. So I collected several pongee fabric samples that allowed her to make a decision.

See pictures and descriptions of the featured project.

Read about award-winning author and designer Diane Plesset — her philosophy, experience, and training.

Any cookies that may not be particularly necessary for the website to function and is used specifically to collect user personal data via analytics, ads, other embedded contents are termed as non-necessary cookies. It is mandatory to procure user consent prior to running these cookies on your website.