D-I-Y Kitchen Remodeling Success: Know What You Can Do and Cannot Do

D-I-Y kitchen remodeling was the last thing that Naomi wanted, but Michael was confident that he could be the general contractor. Like a lot of homeowners, they had been thinking about remodeling ever since they bought the home. Everything about the existing kitchen was dated: white laminate cabinets with continuous oak pulls, white laminate countertops, a dropped ceiling with fluorescent lighting.

The layout needed a lot of help, too. There were two doorways on the same wall, and windows that prevented maximum use of the space. The island was so close to the refrigerator that prevented removal of the vegetable and meat bins. The oven was in a corner, adjacent to the small doorway to the dining room. Michael and Naomi wanted to replace the downdraft cooktop exhaust with a hood, and wanted to replace the existing wood-burning fireplace with a new, contemporary gas insert. They also wanted to convert a useless wet bar in the family room into useful storage for their A-V equipment as part of their D-I-Y kitchen remodeling project. 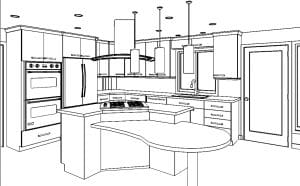 If they had tried to design their new kitchen, it would end up functioning and looking very similar to the existing kitchen. They knew that it would take a professional kitchen designer to help them achieve the great function and the look they wanted. The best D-I-Y kitchen remodeling results are achieved when Homeowners hire an experienced kitchen designer, someone who listens to what they want, and guides them through the design process step by step.

During the next three months, all the details were discussed as the plan evolved. Virtual CAD cameras were placed in the kitchen, family room, and dining room, to show Michael and Naomi what their D-I-Y kitchen remodeling would look like. They really liked Proposed Plan #6, which included the following features:

•  New hood: The ceiling joists had to be located, so the duct could be placed easily. This detail affected the layout of the kitchen, and the new island.
•  Replace the small doorway to the dining room with a pass-through.
This provided valuable (and much needed) countertop and storage in the corner, where the oven had been, and allowed natural daylight to flood the kitchen.
•  Replace the existing garden window, and move the location. This allowed plenty of room for storage in wall cabinets.
•  Remove the existing sidelite next to the single french door. This allowed more countertop and storage space to the right of the sink.
•  Reposition the island. In a multiple-cook kitchen, a minimum of 48” should be allowed for major aisleways in the kitchen.
•  New custom cabinets: Michael and Naomi wanted their new kitchen to have a Japanese feeling, with an emphasis on horizontal lines. The only way they could achieve this was to have a local manufacturer make the cabinets exactly how they wanted them.
•  New gas fireplace insert: The contemporary style they chose needed a sleeker background, so the used-brick wall was hidden behind a new wall with sheetrock.

During the design phase, preliminary plans were sent to three general contractors for estimates. Experience proves that preliminary estimates during the design process helps Homeowners make informed decisions about the size and scope of their remodeling project. Many times, there are tradeoffs involved, especially if Homeowners want to stay within a target budget. To save money, Homeowners need to decide what’s really important to them. For Michael and Naomi, this was very difficult, because they didn’t want to give up anything to stay within their $40,000 budget. The average preliminary estimate was $65,000.

D-I-Y Remodeling Success: What’s Required To Be Your Own General Contractor

Michael and Naomi chose one of the contractors who had been very responsive to them, and asked him to provide a final estimate for the complete project. The final estimate was over $75,000, almost double what they wanted to invest in their new kitchen.

The design discussion became an in-depth conversation about what to do. Michael held his opinion that he could be the general contractor, overseeing the project and hiring subcontractors to do work he wasn’t qualified to do (framing, electrical and plumbing). He’d had experience in the past, flipping homes and upgrading rental properties, so he wasn’t a “newbie.” He admitted that this would be the largest, most comprehensive D-I-Y project he’d ever tackled. Naomi was anxious about living through the project, concerned about how she and Michael would handle the challenges and resolve problems.

The decision was made that Michael would be the general contractor for their D-I-Y kitchen remodeling. Using the steps outlined in “THE Survival Guide: Home Remodeling,” he developed a binder that contained:

•  Contact information for everyone involved in the project, including the building inspectors, trade contractors, and suppliers.
•  An investment spreadsheet, with copies of all estimates and invoices for labor and materials.
•  A calendar that showed at a glance how the construction would proceed.
•  Pockets for product installation and use guidelines.

Construction proceeded smoothly, with very few problems. In the end, it was the first D-I-Y project with clients, and one of the 10 best projects in 33 years of experience. Michael and Naomi saved a lot of money, purchasing all products at the discount price I offered. This project proves that D-I-Y remodeling success is possible, BUT it requires someone who’s organized, with knowledge and experience. It was a test for all of us involved in the project, and we passed with flying colors!

See Before and After photos and descriptions of this project.